The Importance of Citicoline in Combined Treatment in Dementia: What did the Citimem Study Teach us?


Background: Citicoline is a drug used both in degenerative and in vascular cognitive decline; memantine is a drug used for the treatment of mild to moderate Alzheimer’s disease (AD). Our hypothesis is that their combined use could have enhanced action in patients having AD and mixed dementia (MD). We report the main tips from a recent study on the use of these drugs, the CITIMEM study.

Methods: The study was retrospective and was performed on 126 patients aged 65 years old or older affected with AD or MD (mean age 80.7 ± 5.2 years old) who had been visited between 2015 and 2017 in four different centers for dementia all over Italy. Neuropsychological and functional tests were administered at baseline (T0), after 6 (T1), and 12 months (T2). The effects of combined treatment versus memantine alone on cognitive functions assessed by Mini-Mental State Examination (MMSE) and the possible onset of side effects or adverse events, as well as the influence on daily life functions and behavioral symptoms, were investigated.

Conclusion: The CITIMEM study confirms our hypothesis that the combined administration of memantine plus citicoline is safe and more effective than memantine alone on cognition in patients suffering from AD or MD. 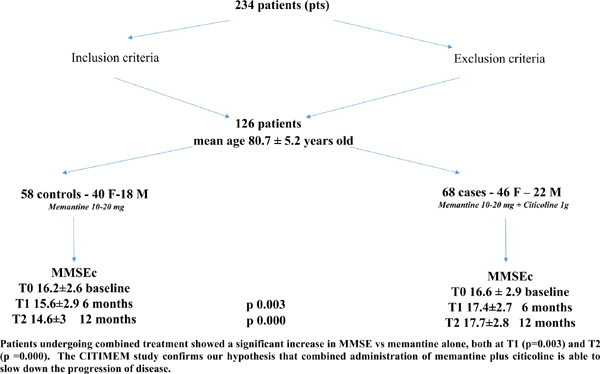